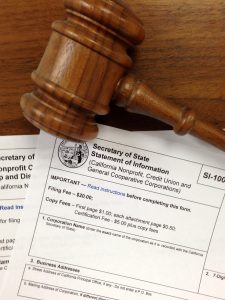 Just forming a Corporation is not enough…

In California, all corporations, regardless of whether they are formed for profit or not, may be created for any lawful purpose. Unless in suspension, the corporation is recognized by the State and granted certain rights and privileges. In addition to granting, so too can the State take them away. In maintaining a corporation in Active and Good Standing with the State of California requires certain steps be taken, some annual and others biannual. Should a corporation fail to comply with the laws that permit its existence, both the California Secretary of State and the California Franchise Tax Board may suspend, revoke, or forfeit a corporation. The depth and severity of revocation or forfeiture are not addressed in this article.

Regardless of which governmental office suspends the corporation, a notice will be mailed to the address on file stating that the corporation is disqualified from exercising its corporate powers, rights and privileges. Such a notification should not be ignored.

The Secretary of State can suspend a corporation based upon the failure to file and pay the annual or biannual Statement of Information. This statement contains the identity of the officers and directors of the corporation, as well as its agent for service of process. The failure to file a Statement of Information on time may, as of this writing, result in a $250.00 late fee.

Suspension with the Franchise Tax Board:

In addition, the Franchise Tax Board has the authority to suspend a corporation based upon the failure to pay taxes or fees that are owed to the State. In the case of for profit or non-profit entities, this suspension may also arise from the failure to file tax returns. However, these failings may exclude religious corporations and other type religious organizations as legally may be allowed, is not covered in the article.

What the above means in a general sense is that the corporation cannot legally operate. More directly, the corporation has lost of its rights and privileges otherwise permitted by law including, but not limited to the ability to sue/defend any action in Court, collect payment for goods or services rendered, amend its articles or dissolve. In addition, while in suspension, a corporation’s name may be taken by another corporation and forever lost.

Most importantly for a majority of my clients is that when the corporation is in suspension by the Secretary of State, the Franchise Tax Board or the State Attorney General, it is not entitled to sell, exchange, or transfer real property located within the state and any contracts entered during that period are voidable by the other party. In addition, the corporation’s tax-exempt status may be temporary or ultimately revoked.

It is also important to know, that tax-exempt status in California is not automatic, even if the exempt status is already approved by the IRS.

The Corporation is in suspension because of the Franchise Tax Board; it is likely because some fee, tax, or filing was missed. This can usually be resolved by retroactively filing the necessary paperwork and paying any fees or assessments.  If the tax-exempt status was not revoked, application can then be made for a Certificate of Revivor, which will inform the suspended corporation of what is required to comply.

When a suspension is imposed by the Secretary of State, it is most often due to the failure to file a current Statement of Information that is required either annually or biannually. As long as it is less than two failures to file, this matter can be resolved by filing a statement of information along with any necessary fees or penalties.

It you elect to or have no choice but to change the name of the corporation, you will have to: 1) Perform a name clearance check; 2) Reserve the new name or run the risk of losing that name as well; 3) Prepare corporate minutes authorizing the Board of Directors to change the corporation’s name; and (4) Prepare and file amended Articles of Incorporation to the California Secretary of State, along with the appropriate filing fees.