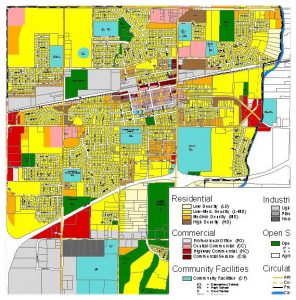 Municipalities establish a General Plan which contains the overall land use scheme by restricting some areas to particular usages. These governmental actions must not be arbitrary, capacious (unreasonable) or vague. Zoning regulations, or codes, must be reasonable and bear a rational relationship to the objectives of the city, while taking affirmative measures to provide housing for all. Municipalities have been given reasonable control over the private use of land from the state through enabling statutes for the protection of the health, safety, morals, and general welfare of its citizens.

A use of land which violates a present ordinance, but was lawful prior to the change. This usage generally runs with the land unless it creates a danger to health or safety or is discontinued. In other words, provided a church continues to operate, even though the underlying zoning has changed, the church may remain. This is only so long as the basic use is observed and unchanged. A physical expansion of the facilities, if allowed, will usually trigger the property be conformed to current zoning. Other codes may also be affected. The word “Grandfathered” is often loosely used to refer to this situation.

A use that is specifically named and authorized by the zoning ordinance, under which specified conditions are attached.  It usually runs with the land until such usage is discontinued, or the conditions of approval have been proved to have been violated by formal process.  Simply put, a use permitted by the zoning ordinance in a district/zone in which it is not necessarily incompatible, but where it might cause neighboring harm if not conditioned.

Congress determined that houses of worship were being disproportionately affected by many local land use decisions and discretions, such as zoning ordinances. Congress further found that zoning authorities were frequently placing excessive burdens on the ability of church congregations to exercise their faiths to be in violation of the Constitution. As a result, Congress enacted a law known as The Religious Land Use and Institutionalized Persons Act (RLUIPA). Its intent is to protect religious institutions from unduly burdensome or discriminatory land use regulations. It generally requires legal interference by a church for action against a municipality, to be asserted or proven, and thus enforced.

The California State Appeals Court upheld a city’s exclusion of churches from single-family residential zones with the following reasoning:

It is a matter of common knowledge that people in considerable numbers assemble in churches and that parking and traffic problems exist where crowds gather. This would be true particularly in areas limited to single family dwellings. There necessarily is an appreciable amount of noise connected with the conduct of church and youth activities. These and many other factors may well enter into the determination of the legislative body in drawing the lines between districts, a determination primarily the province of the city. A single-family residence may be much more desirable when not in an apartment house neighborhood or adjacent to a public building such as a church. The municipal legislative body may require that church buildings be erected to conform to health and safety regulations as provided in its building code and we see no reason to hold that churches may be erected in a single family residential area when a duplex, triplex, or other multiple dwelling can lawfully be excluded therefrom. The provision in the ordinance for a single-family residential area affords an opportunity and inducement for the acquisition and occupation of private homes where the owners thereof may live in comparative peace, comfort and quiet. Such a zoning regulation bears a substantial relation to the public health, safety, morals and general welfare because it tends to promote and perpetuate the American home and protect its civic and social value. Corporation of Presiding Bishop v. City of Porterville, 203 P.2d 823, 825 (Cal. App. 1949).

As Cottonwood Christian began to rapidly grow from a 700-seat sanctuary with the necessity to bus in members from surrounding areas, to a 4,700-seat sanctuary. To facilitate their needs, the church purchaed an eighteen acre property with plans to develop multiple classrooms and a multi-purpose room for youth and other ministries. The proposed center also included a youth activity center, gymnasium, and study rooms for after school youth programs. The city however had other plans and refused to issue the necessary conditional use permit to the church.

Religious Land Use and Institutionalized Persons Act prohibits any government agency from:

imposing or implementing “a land use regulation in a manner that imposes a substantial burden on the religious exercise of a person, including a religious assembly or institution, unless the government demonstrates that imposition of the burden on that person, assembly, or institution—(A) is in furtherance of a compelling governmental interest; and (B) is the least restrictive means of furthering that compelling governmental interest.”

The court determined that in refusing to grant the conditional use permit by the city “involves a land use regulation or system of land use regulations, under which a government makes, or has in place formal or informal procedures or practices that permit the government to make, individualized assessments.”

There can be no violation of Religious Land Use and Institutionalized Persons Act or the First Amendment unless government action imposes a substantial burden on core religious beliefs. The court concluded that this requirement was met: “Preventing a church from building a worship site fundamentally inhibits its ability to practice its religion. Churches are central to the religious exercise of most religions.

If a congregation could not build a church it could not exist.” The court also concluded that no compelling governmental interest supported the city’s actions. In rejecting the city’s argument that “revenue generation” (having a Costco store on the church’s property) was a compelling interest, the court observed, “If revenue generation were a compelling state interest, municipalities could exclude all religious institutions from their cities.”